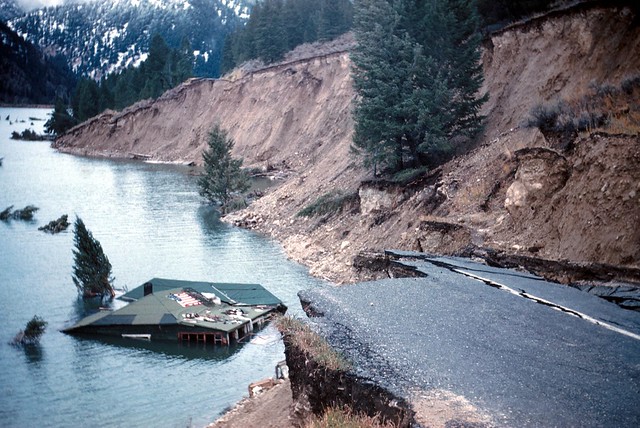 Montana 1959, M7.3 Earthquake — On August 17, 1959, Hebgen Lake, Montana was shaken with a M7.3 quake, the largest earthquake to hit Montana. This earthquake caused 28 fatalities and about $11 million in damage to highways and timber. It is characterized by extensive fault scarps, subsidence and uplift, a massive landslide, and a seiche in Hebgen Lake.

The most spectacular and disastrous effect of the earthquake was the huge avalanche of rock, soil and trees that cascaded from the steep south wall of the Madison River Canyon. This slide formed a barrier that blocked the gorge and stopped the flow of the Madison River and, within a few weeks, created a lake almost 53 meters deep.

Many summer houses in the Hebgen Lake area were damaged: houses and cabins shifted off their foundations, chimneys fell, and pipelines broke. In this photo we see the main residence of Hilgard Lodge that is almost wholly submerged in Hebgen Lake.

This photo is in 5 groups

This photo is in 2 albums